Cable News Network (CNN) is the US news-based pay-TV channel through WarnerMedia News and Sports. CNN was founded in 1980 by US media owner Ted Turner as a 24-hour cable news channel. It was the first TV channel to provide 24-hour news coverage, as well as the first all-new TV channel in the United States (History, 2018). As of July 2015, CNN is available to approximately 9,6374,000 pay-TV households in the United States. Globally, CNN programs are broadcasted through CNN International and can be seen by audiences in 212 countries and regions (TV numbers, 2015).

CNN’s first news report was an interview with then-President Jimmy Carter by Daniel Schorr. Schorr read the debate to John B. Anderson, then CNN broadcasted Anderson’s live response from Carter and Reagan (Christian Science Monitor, 1980). CNN has played a leading role in many major historical events in the United States. The first Gulf War in 1991 was a watershed event by CNN. This was the first time in history that the network was pushed to the “Big Three” US network, due to an unprecedented historical exclusive report: CNN was the only news station with the ability to communicate from inside Iraq during the initial hours of the American bombing campaign (). Additionally, CNN was the first major network to break the news of the September 11 attacks in 2001. Anchor Carol Lin was on the air to deliver the first public report of the event (Jedrzejczak, 2019). Meanwhile, CNN has been criticized for over pushing “human interest” stories and avoiding description of violent images, resulting in the alleged “propagandistic” news.

The demographic profile of CNN in 2018 shows that the male group makes up around 52 percent of the CNN audience. Most readers are over 45 years old, which occupies more than half the audience (Hwong, 2019). Further research of CNN’s audience tells that a typical target audience of CNN is a college graduate with 50K household income per month. Moreover, the political issue is most concerned topic for CNN audience, and most of them hold the left-leaning views, which means CNN takes a liberal stance in much of the coverage (Hashmi et al, 2012).

BuzzFeed is the leading independent digital media company in the world, reaching hundreds of millions of people around the world with data and innovative technology. It is an American Internet media, news and entertainment company with a focus on digital media, which is based in New York City (about Buzzfeed, 2019). Buzzfeed was founded in 2006 by Jonah Peretti and John S. Johnson III, to focus on tracking viral content. As of 2016, BuzzFeed had correspondents from 12 countries, and foreign editions in Australia, Brazil, France, Germany, India, Japan, Mexico, Spain, and the United Kingdom.

Initially, BuzzFeed didn’t hire any writers or editors, just used an algorithm that “removed stories from the web, and these stories showed virality.” (Rice, 2013). Now the company has grown into a global media and technology company, providing coverage on a variety of topics including politics, DIY, animals, and business. BuzzFeed gains most of its traffic by creating content shared on social media websites. It works by judging how they will become the content of virus, running in a “continuous feedback loop” (Robischon, 2016). A famous story from Buzzfeed was “The dress”. In February 2015, BuzzFeed’s Tumblr editor Cates Holderness’s post on the color of a dress won more than 28 million views in a single day, setting a record for most concurrent visitors to BuzzFeed posts (Smith, 2015).

On the other hand, Buzzfeed has tended to expand the site into serious and long-form journalism, and reportage since 2011, when BuzzFeed hired Ben Smith of Politico as editor-in-chief (Stelter, 2011). After years of investment in investigative journalism, BuzzFeed News had by 2018 won the National Magazine Award and the George Polk Award, incorporated into the Pulitzer Prize and the Michael Kelly Award. Despite BuzzFeed’s entrance into serious journalism, a 2014 Pew Research Center survey found that in the United States, the majority of respondents believe that BuzzFeed is an unreliable source regardless of age or political affiliation (Mitchell, Matsa, Gottfried & Kiley, 2014).

Contrary to CNN’s audience composition, over 60% visitors of Buzzfeed are females, and audience blow 45 years old make up around 64% of population distribution. 70% of Buzzfeed traffic is from mobile devices, and 42% of it comes from social media (Smith, 2019). It is also showed that about 60% of Buzzfeed’s page views are contributed by Facebook, and the second-highest source is Twitter. Some of the most popular topics on Buzzfeed are news, shopping and fashion (SimilarWeb, 2019).

These two stories were about the Brexit process of Britain. As a political topic, the Brexit news mainly aimed to CNN’s main readership according to the demographic profiles above. On the other hand, Buzzfeed tends to expand its influence in the field of serious topics, and it provides the news with a more diverse approach. Comparing with Buzzfeed, CNN’s report is closer to traditional reporting techniques.

The basic principles of writing for web includes Brevity, Adaptability, Scannability, Interactivity, Community and Conversation (Bradshaw, 2018). Scannability means that web pages should be easily for readers to look through, and the scanning mode now forms a “F-shaped pattern”:  firstly reading heading and subheading at the top of page, then reading down a bit, finally moving vertically down to the left edge (Bradshaw, 2018). According to this “F-shaped pattern”, CNN placed two related articles on the left side to attract attention.

Sub-heading is another important factor to suit scannability, and the news on Buzzfeed had a sentence under the heading to briefly introduce the news content. It helps readers to understand the news and decide if they are interested in the news.

Hyperlinks and embedded material are also useful methods providing more information and enhance scannability. In these two cases, Buzzfeed was more scannable with some links and embedded tweets in the article. The two links respectively jumped to a pdf document of the European Council and another report of Buzzfeed. The links were clear and terse, but it could be more convenient for readers if the reader has labeled the document vision in the text.

Moreover, the embedded tweets were stronger than simple links, as Twitter is one of the main sources where traffic from to Buzzfeed. These tweets presented information more directly, and that was what readers could not see on CNN.

In addition, Buzzfeed has another typic digital element at the button of pages, comment section. Conversation has become a significant trend in the development of news writing. Consumers want to read online content, generate it and exchange it, rather than passively consume it (Bradshaw, 2018). Comment section encourages readers to leave their views, discussing with reports and each other. CNN ignores the conversation with readers on its pages while it is an important fiction of Buzzfeed, but the Brexit news had no comments left, which just proves that this topic is not the main concern of Buzzfeed’s audience.

Meanwhile, interactivity is as core to online journalism, such as video and audio player that allow users to interact with multimedia materials (Bradshaw, 2018). CNN tryed to strengthen interaction through several videos in the front of news. These videos talk about background of Brexit, obviously CNN believes these kinds of video could meet the needs of target audience. However, these videos are also used in other related reports on CNN, so these similar videos might lack pertinence. 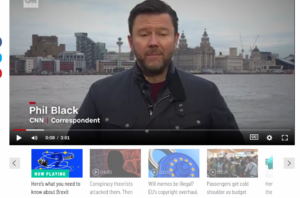 Images also play important roles in news online. Writers prefer to present content, rather than describe it, and images contribute to visual presentation, conveying facts through the audience’s senses (Briggs, 2013). Buzzfeed attaches more importance to feature images than CNN. The feature image that corresponds to the theme enabled readers identify the content immediately. However, there was no more image in text, nor in CNN’s report. These Twitter links sort of take the place of images, as they supplemented the news content.

In conclusion, the two reports from CNN and Buzzfeed improved their readers’ digital reading experience through different ways. CNN added videos in the article, and constructed content following the reading habits, while Buzzfeed built a closer connection with social media, and embed hyperlinks as well as comment section. Specifically, Buzzfeed uses more of the writing skills of online journalism due to its digital born background, and its target audience composition. CNN, although lacks some techniques, tends to show its multimedia to enrich audience’s sensory experience during read.

About BuzzFeed. (2019). Retrieved from https://www.buzzfeed.com/about

Bradshaw, P. (2018). Writing for the Web. In The Online Journalism Handbook: Skills to survive and thrive in the digital age (pp. 72–98). Routledge.

Jedrzejczak, A. (2019). Here Are The Greatest Moments In CNN History. Retrieved from https://www.businessinsider.com.au/here-are-some-of-the-greatest-moments-in-cnn-history-2010-6?op=1&r=US&IR=T#1986-cnn-is-the-only-network-to-film-the-challenger-launch-live-1

Smith, B. (2015). The Dress. Retrieved from https://www.buzzfeed.com/bensmith/culture-web-culture

TV Numbers. (2015). List of how many homes each cable network is in as of July 2015. Retrieved from https://tvbythenumbers.zap2it.com/reference/list-of-how-many-homes-each-cable-network-is-in-as-of-july-2015/

I analyzed an article on BuzzFeed which is about air cabin crew being arrested because of bringing $21 million-worth drugs into Australia. There is only one hyperlink in this article, which linked to an ABC News article that […]

https://www.buzzfeed.com/ginarushton/mark-speakman-bettina-arndt-order-australia-review     Is the headline SEO-friendly? The article currently appears at the end of the second page of a Google search. With generic keywords like ‘men’s rights activist’ and ‘prestigious honour’, you can see […]