The articles chosen for analysis belong to the UNews and the Quillette Platform. While the former is a mainstream news channel, the latter entails a participatory service. The USNews & World report began in 1933 as an American medium company as a news publication platform by Daniel Lawrence (About U.S. News & World Report, 2013).  The company expanded its news coverage to the online world in 2010 with the increasing use of social media platforms. The medium covers all types of reports from current issues, to opinions, offering rankings as well as analysis. The USNews is among the best-ranked news coverage service among the Americans and to the rest of the world (About U.S. News & World Report, 2013). On the other hand, the participatory news site, Quillette is a place of free though and speech. The site was developed by Claire Lehman in 2015. The news site covers areas such as politics, news, culture, science, and politics.  The 2015 formed website aims freely expressing its ideas to the world in a bid to gain more insights about the different perspective. Quillete operates as a blog and receives funding through donations and affiliate marketing and has a huge response rate from its audience. The entity provides room for interested content writers to pitch their ideas through their email to expand their ideas (About, Quillete). With massive coverage, Quillette can fits in as a successful contemporary participative news site.

The target audience of USNews & World Report is vast. According to their website, https://mediakit.usnews.com/audience, the site had a 120m views in 2013, with a 20 million new guests monthly. By 2015, the number of policy makers, business leaders and educational professionals; their main audience, were about 300 million. The range of viewers on the platform is knowledgeable, research oriented, calling for well-informed credible information, considering that they also get ratings and ratings for all their articles. Adult percent s above the age of 35 constitute a more than 50 percent audience, with about 40% millennials and a few below 25 years old readers https://mediakit.usnews.com/audience.

Although theres is little information about the specifics of quillette audience, Alexa  (2019), ranks the media as the 6, 095 in the United States presently. The platform extends its audience to the social media with as  143k and  37k following on Twitter   and Facebook respectively.

The coverage by the news sites is on the current hate speech laws by Facebook. In the article, Facebook Extends Ban on Hate Speech to ‘White Nationalists by Barbara Ortutay. The UsNews expounds about the bun, providing evidence from the relevant sources. The article tile is eye-catching as it uses key words such as “Facebook”, “ban”, “Hate Speech” and “White Nationalists” that objectively gives the reader an entire idea of what the information is about. The title also showcases certainty in the information it’s providing, by using the word “ban” unsure adverbs such as maybe. To solidify the claim, the content uses direct quotes and paraphrases from different authorities such as critics, advocacy groups as well as the Facebook Inc (Ortuay, 2019). Ortutay addresses the reasons why Facebook opted for a ban, through the use of logos. One of the information raised is about the New Zealand shooting where individuals broadcasted the massacre and the white nationalist car attack that triggered hate speech among them (Ortutary, 2019). Even though the content is accurate focusing on the prevailing situation, it appears like the news supports the ban. Providing the actual words exhibited by the authority enables the believability of the content. That way, the audience will consider the given information as accurate.

The article “Facebook Has a Right to Block ‘Hate Speech’—But Here’s Why It Shouldn’t” by Brian Amerige, is also straight to the point. Use of adverb “but”, leads to reader curiosity about the rejection of the Facebook hates speech. For that reason, the title successfully catches the audience into readership. The actual content starts with a story of the author’s experience working for Facebook.  The information given is personalized, igniting the pathos side of its audience and into a response. Al-Rawi (2017) indicated the love and effectiveness storytelling online delivery based on an analysis of social media platforms. The approach increases the accuracy and believability of thee given information. The use of strong opinions such as how hate is a feeling, the audience can rethink provided policies submerge their thoughts about personal encounters with hate speech in addition to engaging their ideas into the comments section (Amerige, 2019).

Consequently, in as much as both contents are accurate in terms of delivery, Quillette is more effective in engaging the readers, despite the few uses of other visual content. Nevertheless, the articles differ in presentation approach; they both are successful in the title specificity and brevity as well as in developing content accuracy.

The information given by the sources differs in their interactivity level.  Interactivity entails a capacity to allow a two-way flow of information. The line of thought does not assume information indispensability but instead believes in the broad opinions of its audience, one as a way of gaining more instances about the shared information.

Clearly, the hate-speech news provided by the USNews  & World News faults in interactivity, applying the traditional approach of information sharing that only focus on facts. Article lacks any hyperlinks to direct the reader into further knowledge gathering. The mainstream could improve its delivery by including multimedia such as a relevant link e.g. https://youtu.be/5rO4Rhd1TZA, or show pictures of occurrences that led to the ban such as the livestreaming of the New Zealand gunman. Although the site contains clickable links for interactivity, including a comment section would tremendously increase participation and improve readership. Figure 3. Shows the share ability of the media information to various platforms;

The Quillette article makes use of hyperlinks that directs a reader to other information sources related to the content.  The writer connects the links such that they are part of a constructive sentence.  Upon opening the links, they further explain the events, helping the audience relate both contents and create an opinion. In my view, Amerige, effectively uses the hyperlinks and effectively distributes then in the relevant areas of the text. 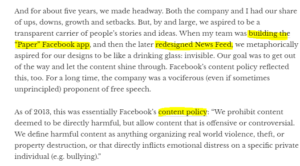 Another advantageous approach the participatory device uses is the provision of the Facebook and Twitter of the author and the website, together with other media tools, such that the readers can continue their interaction, together with an email address. Journal further

provides room for a weekly subscription further amplifying a sustainable interaction. Such tools extend the conversation of the topic among a vast audience. 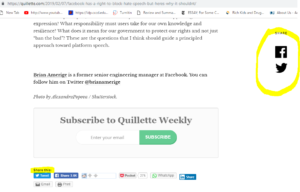 Therefore, Quillette successfully captures the readers’ interest in the story compared to the USNews because of using several interactivity strategies.

The technical delivery of both texts is simple and usable. The writing of the content appears in only one page, eliminating constant clicks to another page for complete readership another critical issue the sites have well covered in the pop-up adverts that most sites use. Commonly, websites use frequently adverts pop-up that disrupts readership requiring an activation of the pop-up adblock tool. However, the articles differ in the legibility of the text, with the USNews utilizing fewer words, with larger font size and short paragraphs. This allows the reader to flip through the information in less than five minutes quickly. 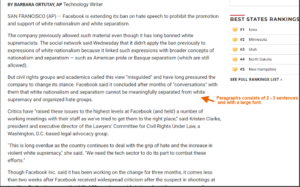 Quillete uses shorter font, longer paragraphs which focus one to focus on the reading. With an increasing number of people evading long blogs, the websites reeds it of a broad reader base.  Regardless, the use of personal stories captures a reader into wanting to read the article. Through the comments base, it is clear that the audience enjoyed the readership. In my view, offering personal opinion also intrigues readership. 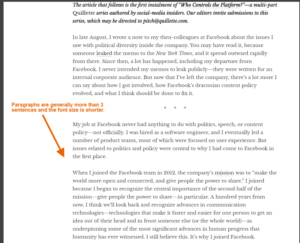 Lastly, both articles could improve on their use of links and playable multimedia links to reinforce their claims, as they lack in both. Generally, the technical delivery of the articles is fair enough, showing an understanding of the types of material each medium prefers.

Core Differences between the Texts

The mainstream medium and the participatory news site differ in various ways. First, the mainstream personnel seem to care less about interactivity with the audience, but rather, providing the existing information. The advantage of the method is that it allows the viewer to gain facts about the news. Consider the current hate speech analysis; the content creator provides that the Facebook knowledge about the ban, citing the exact words articulated by the different CEOs and President, referring to actual incidences that led to the ban as well as expressing the long overdue interest in curbing offensive words among white nationalists online (Ortutary, 2019).

Such information paves the direction for the participatory sites, which offer a varying point of views. Consider Amerige, who solely provides his opinions on hate-speech. He questions the necessity of banning hate speech on Facebook. Without knowledge of the ban, the author would not have his argument. For that matter, it is safe to consider websites content creation as extensions of the primary information, that offer a way for the readers to expand on the issue, how they affect them and their perceived policies. The use of logos by the mainstream medium provides another difference with the platforms such as Quillette. As above mentioned, the approach of the former ensures the objectivity of the information given, without which every shared knowledge out there would be invalid. For sure, the role of the mainstream medium stands as key especially to describe existing facts as they are.

Based on the analysis, both tools are useful in their own way. USNews & World Report gives information with short word count and short paragraphs. The news only covers the actual happenings of a current event. Upon observation of the same activity in other mainstream media platforms, the information similarly handles the case as Facebook hate speech ban among white nationalist. Even though the evidence used may slightly differ in terms of the provided context, the reality won’t be farfetched from one another.

Conversely, highly opinionated sites completely differ in delivery, first because they base their arguments on experiences and observations. As a result, their content captures a dynamic audience, who can as well offer their perspectives. For that matter, the news site wins in their interactivity. Nevertheless, both sites would be more effective if they applied more hypertexts such as video. Consider the USNews & World Report sharing a visual link of a speech by of its source, or an audio recording. Quillette would also significantly gain from such through giving links that reinforce their argument about the unnecessity of hate speech ban on Facebook or any other medium.

Simply put, the news stories provided by mainstream and other sources complement each other since one focuses on actual events and the other on reactions about the events respectively.

About. Quillette. Retrieved from https://quillette.com/about/