This essay will be divided into five sections to analyze the two different digital media sites, China daily and BuzzFeed, from different perspectives of the audience and news stories reported on the same event. The first part is the background introduction. The paper will introduce China daily and BuzzFeed in terms of politics and operation types. The second part is a user analysis，monitor data from two groups of website users. The third part is a brief overview of the selected news stories. The fourth part analyzes and compares the different reporting methods of the two websites through the textbook and the concept of reading. The fifth part is to summarize the paper.

The type of China Daily is a daily newspaper published by the Communist Party of China and the State Council Information Office. The China Daily was established in June 1981 and is the largest circulation of all English newspapers in China.

The China Daily, together with the English Global Times, is aimed at international audiences, including foreign diplomats and tourists, because it translated major Chinese newspaper articles in editorials. The digital version of China Daily was established in December 1995 and is one of the first online Chinese newspapers in China. It has a large audience worldwide; its daily page view The number has now exceeded 31 million, 60% of which is from outside China. China Daily is the most popular media, and its audience exceeds the print media of China Daily. 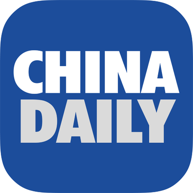 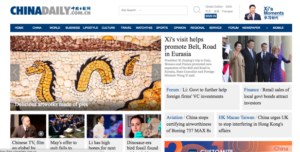 （Source: China Daily: the screenshot of the web）

BuzzFeed is a US Internet media, news, and entertainment company that specializes in digital media; it is located in New York City.BuzzFeed was founded in 2006 by Jonah Peretti and John S. Johnson III.

Originally known for its online quizzes, “lists” and popular culture articles, the company has grown into a global media and technology company offering a variety of topics including politics, DIY, animals, and business. At the end of 2011, BuzzFeed hired Ben Smith’s politician as editor-in-chief, editor-in-chief, to expand the site to serious news, long news and reportage. After years of investing in investigative journalism, BuzzFeed News won the National Magazine Award and the George Polk Award in 2018, incorporating the Pulitzer Prize and the Michael Kelly Award.

The business type of the site is privately owned, which is different from China Daily.

（Source:Buzzfeed: the screenshot of the web） 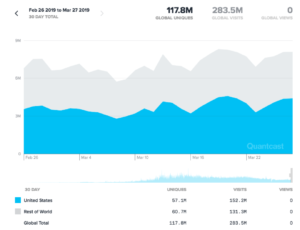 （Source:Quantcast: the screenshot of the web）

Among them, non-domestic visits were 2.835 million. Buzzfeed is an international-oriented, entertainment-oriented online media. Unlike China Daily, serious news is less in Buzzfeed, so a large number of foreign audiences will browse the network. 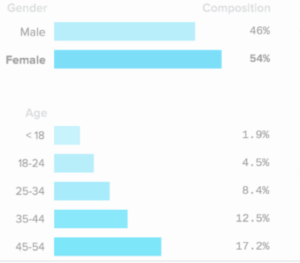 （Source:Quantcast: the screenshot of the web）

As can be seen from the data, the audience of 45 to 54 years old is the highest interest audience of BuzzFeed. They are characterized by economic independence and stable social relations and have a need for an understanding of current affairs and social news.

Then move on to the China Daily

（Source:Alexa: the screenshot of the web）

From this audience map, we can clearly see the difference between China Daily and Buzzfeed. China Daily is owned by the state. In the audience distribution, the number of visitors from China far exceeds that of other regions, accounting for 92.9%.

Due to the political nature of the China Daily, readers are mainly high-end people in politics, business, and think tanks at home and abroad, and two-thirds are foreign readers. Readers include government policy makers, senior managers of multinational corporations, diplomats, national chambers of commerce, experts and scholars.

Brief Introduction of the news story

The shootings in two mosques in Christchurch, New Zealand have killed 50 people and injured 50 others, the most serious casualties in the country’s history.

Brenton Tarrant, a 28-year-old Australian citizen, streamed his own attack on social media Facebook, claiming to be a white supremacist.

At the time of the attack, Tarant streamed his own attack on Facebook. New Zealand Prime Minister Aden said that the role of social media, such as Facebook, in the incident should be reviewed.

“Facebook,” said that up to 1.5 million video footage of the attack had been removed from the social media platform within 24 hours of the attack. “Facebook” also said that in addition to all the various versions of the video clips that have been edited but have been attacked. 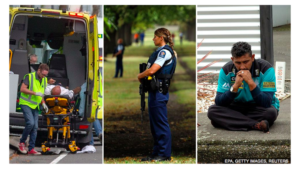 （Source:BBC: the screenshot of the web）

The two media selected in this article respectively reported on the government’s decision to order social media sites to delete related videos. The government believes that the release of the video on human death and anti-social violence on the media platform will have a certain impact on social stability. The coverage of social media is vast, and millions of posts will further expand the impact of things.