The City of Sydney said it has partnered with the Biennale – an international festival of contemporary art held every 2 years in Sydney – since 2013 to deliver public artworks by contemporary artists. It said The City of Forking Paths is the first legacy artwork in 2014 commissioned by this partnership. “Curated by Julianna Engberg,” this artwork appears again this year where people are free to register for the walking experience.

I would like to write a feature story about The City of Forking Paths. Till now, there have not been any feature stories covering this topic. My story will provide more insights into its creator, its thematic and artistic elements, then talk about people’s reaction towards it and its impacts on the now and future digital trend of contemporary arts.

I plan to publicize my feature story on the Sydney Morning Herald (SMH). SMH publicized a piece of hard news about The City of Forking Paths in 2014. It talks about the partnership and describes the walking experience briefly. I would like to follow up with this news, to talk about its reappearance in public in 2019 in a feature story.

According to the City Art Sydney, guests will be able to use mobile devices and headphones to take a fictional journey through the physical surroundings from the Customs House in Circular Quay through the Rocks. Guided by footages with backgrounds match with real-time locations, along with the artist’s audio voice, the walking experience blends reality and fiction. It combines present and past memories, presenting a narrative where time does not flow in a linear direction. 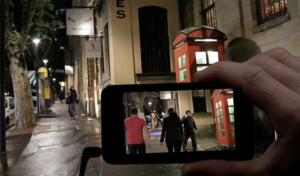 Source: Sydney Morning Herald; by John Saxby. “The City of Forking Paths app will take viewers on a night walk through The Rocks.”

Other than simply showing the walking experience, I will give my interpretation of its theme with research about its creator. According to The City of Sydney, The City of Forking Paths is created by Canadian artists George Bures and Janet Cardiff. They are multimedia artists who started to produce artwork in the 1990s.

City Art Sydney also highlights that the creators were inspired by a 1941 short story, The Garden of Forking Paths, homage to Jorges Luis Borges’s story. In the story, readers can make choices to change the fate of the main character. The function of readers changes from that of consumers to producers in this literary work. Similarly, The City of Forking Path enables readers to participate in the artwork, to maybe walk in different paths for different outcomes, instead of simply viewing a traditional painting passively.

More importantly, The Garden of Forking Paths has always been acclaimed for its pioneer in hypertextuality. Time in 2011 said Google doodle honors writer Jorges Lui Borges “Forking Paths” story. In my feature, I will further examine the relationship between this story and The City of Forking Paths, to further understand Bures and Cardiff inspirations for their artwork.

Then, I would examine the social aspects of this artwork in my feature. By doing so, I plan to interview the curator, Julianna Engberg about;

As I think it could be practically hard to interview the artists and curator, I also plan to interview Heather Tralaggan, the spokesperson of City Art Sydney, who manages the registration and tour for the City of Forking Path. Ms Tralaggan said she would be happy to answer my questions about this art event after the tour. I have registered my walking tour dated on April 30 5:45 pm at the Customs House in Sydney.

Lastly, I will interview some participants about the tour and views on digital technology in contemporary arts.

First-hand resources would be my own walking experience and interviews.

Below show the links of my secondary resources:

About the Garden of Forking Path by Jorges Luis Borges

About the City of Forking Paths

About the Biennale of Sydney

You may walk in The Rocks like a visitor, shopping at small booths, dining at classic European restaurants and enjoying the atmosphere with its long history. But have you ever walked there guided by a […]

The ‘Access Inclusion Seekers’ furore according to USYD’s Hayden Moon

At a meeting of the Sydney City’s Council Inclusion Advisory Panel last month, mayor Clover Moore heard a suggestion from Mark Tonga, a member of the panel and a person with a disability, that using […]

“Sydney’s a bit sleepy, isn’t it?” said Ms Friml, a Uber drive, as she picked me up. We drove through the Harbour Bridge and then across the CBD. Outside, it was dark and quiet. Shops […]