The data from the ABS Australia official website shows that overseas immigration to and from Australia in 2018 resulted in a net increase of 237,200 in Australia. In the year ending June 30, 2018, temporary visa holders accounted for the majority of immigrants (62%) and immigrants leaving the country (49%). The number of immigrants with temporary visas is 327,300, including nearly 159,000 international students (30% of all immigrants).  It cannot be denied that Australia has become one of the largest immigrant countries in the world. Every year, many foreign residents immigrate to Australia permanently.

Combined with another set of data, the official data released by the Australian Government, the Department of Education and Training released the international student data for Australia in 2018. As of December 2018, there were 693,750 international students, an increase of 11% over 2017. Among them, there are the largest number of Chinese students, reaching approximately 220,000.

Why Chinese students come to Australia?

Australia’s third largest export is international education and our highest intake of students come from China. Amy, one of the head of the Department of International Exchange at the China Student Association of the University of Sydney, gave a corresponding explanation as to why Chinese students chose Australia. For Chinese students, studying in Australia is a good opportunity to communicate with the outside world. Second, the government has a good study abroad policy, which applies not only to Australian citizens and Aboriginal people, but also to many international students. Finally, Australia is a multicultural country, which means that people’s ideas are relatively open and there is no critical view of culture and belief. Many Chinese students who participate in the Chinese Students Association of the University of Sydney have indicated that Australia is a multicultural country with a high degree of tolerance and a high level of teaching. It is one of the countries preferred for studying abroad. 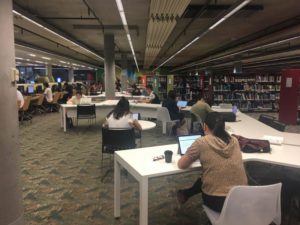 Many Chinese students who have not yet entered Australia are full of embarrassment about their future study and life. Zixuan Wang, a student in China, is currently studying IELTS through the language review stage and applying for a postgraduate degree in architecture at the University of Sydney. The reason why she wants to study abroad is very simple. Because she has been studying in China for four years, she wants to change her cultural environment. At the same time, after comparing other factors such as language requirements, the final choice is to study at the University of Sydney.

The higher education program director at the Grattan Institute, Andrew Norton, warned that Australia’s databases have become dangerously reliant on Chinese students. This warning came after a near doubling of international student arrivals over the past five years.

However, the way to obtain PR through study abroad has gradually become difficult with the change of policy.

Not only does Australia’s relevant policies affect the number of Chinese students coming to Australia, but China’s relevant policies have also had a certain impact. In recent years, Chinese students have become more and more likely to apply for Australian visas. After a series of public accusations against Canberra’s political motives to delay visas, Chinese official media released a “red alert”, suggesting that students not go to Australia to study.

With the development of economic globalization, Australia relies on the huge economic benefits brought by international students. At the same time, the arrival of Chinese students is also an improvement of the teaching model of Australian schools.

（screen shot from the Australian Government, the Department of Education and Training）

Cultural collisions are certain, but they are not intensified by social contradictions. While the migrants are entering Australia, the Australian government also encourages more Australians to go out. Social resources are not resource-poor because of the immigration of Chinese students.

For Chinese students who are about to enter Australia and apply for PR, it is very important to pay attention to the Australian policy and the relevant adjustments made by the school. Don’t miss out on some important details.

“Have you find a job?” “Are you going to stay in Australia or go back to China?” Those are the common greetings among Chinese students in Australia who are going to graduate in 2019. “I […]