This article, titled ‘Harvey Weinstein Is Now a Convicted Rapist’ by Amanda Arnold for New York Magazine’s female-focused, web subset, The Cut is a hard news piece. Beginning with a strong and SEO-friendly headline, the readership is somewhat limited to those familiar with The Cut, as it only shows up on the third page of Google results. The article itself is concise, with a layout that is easy to follow and thoughtfully placed on the site. The use of one, black and white image of Weinstein is emotive and powerful in its position. In a news story such as this, much of the coverage is exhaustive and prone to clickbait, whereas this presents as an editorial yet with the word count of a news article. 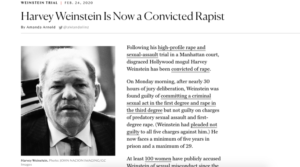 There are frequently used links in this piece, all directing to related articles produced by New York based publications including the New York Times, New Yorker and Vulture. While informative, these links open to another page, rather than tab which directs readers away from the site. This article is user friendly, but not social-media friendly. Beyond the Journalist’s own twitter handle, there’s no option to share the article. Comments are allowed at the end of the article, but users must sign in to view other comments. For a story as culturally topical as this one, not allowing the option to engage with it on social media feels like an oversight, particularly considering The Cut’s exclusively online platform. Beyond this, the article is powerfully presented and aligns with The Cut’s previous coverage of #MeToo.