The news I chose is about Nigerian school collapses which published at China Daily on 14 March 2019. It is a brief news and have very clear point. However, compare with the same news story published at ABC news, it still has some space for improvement.

First, the news story lack of image. The whole story only used one picture of the injured boy at the beginning of the news. I think it is better to add more picture about the accident to give people more visual and detailed information. 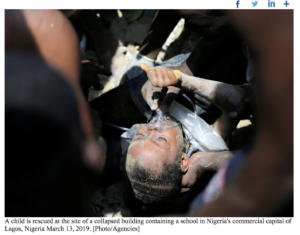 Compare to the news post on ABC news, the ABC news use more than 5 image and all the pictures is about the scene of the accident. 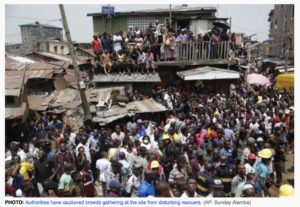 I think it would elicit emotion and reaction of the reader by adding an image under the weeping father, and add some pictures of the accident scene about how the rescue operation is going and what kind of damage the accident caused.

There are no hyperlinks of the whole story. At the end of this news, it mentioned this kind of accident often occurred in Lagos but there is no evidence to support it. It will be more reliable and relevant to add some links about the building collapses news happened in Lagos before.

The news story from China Daily has no key point, no highlight. The whole story is single format and only use some blank space to separate paragraph.

The news story published at ABC news has clear key points and a list of related story which gives the reader a better reading experience. 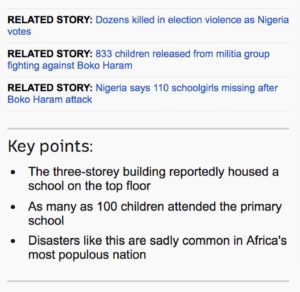 The pioneers of online journalism came up in the early 1900s (Bradshaw, 2018), among whom VICE and China Daily were standing on the same starting line. The divergence of their development over the past decades […]

Can the new TikTok #ShakeALegChallenge offer an opportunity to learn about issues faced by Indigenous Australians?

I’m interested in writing a feature exploring the ways in which young people are using TikTok as a platform to engage in social, political and cultural issues. I will use a new dance challenge, launched […]