The internet improves the development of online journalism and forces many traditional mainstream media companies to build their digital platforms. The features of internet users and abilities of online services create a unique news report style which differs from traditional news writing. Through the comparison of the following news stories, it could identify the similarities and differences of mainstream publications and digital born news sites.

‘So Ridiculous!’: Trump accuses the media of trying to blame him for New Zealand shootings(The Washington Post)

The Washington Post, a 47 Pulitzer Prizes winner, is one of the leading American daily newspapers founded in 1877. It works with the White House, Congress and other parts of U.S government, mainly reports news about national politics and the federal government. The most well-known news event of this newspaper is the Watergate Scandal investigation report from its journalists Bob Woodward and Carl Bernstein in the early 1970s. In 2013, the Washington Post is bought by the Amazon Founder Jeff Bezos that change the digital strategy from local to global publication (Veseling, 2018, ‘Washington Post puts emphasis on’, para 6). The official website launched in 1996 by its executive editor Jim Brady covers global news in the aspects of politics, health and sciences, world and national. The website ranked the 11th of Alexa 500 top global news sites (‘The top 500 sites on the web’, 2019). This story is written by John Wagner, a national reporter leading the Post’s breaking political news team.

SimilarWeb (2019) infers the website has over 160 million total visits in February 2019. According to Alexa, the Washington Post website is visited mostly by the female with college-level education and its audiences frequently visit the page at school or during work. Through the map of audience geography, America is the leading user country that takes over 65 per cent of online visitors.

This news story has a high scannability in the aspect of language concession and structure clarification. The title directly infers the main theme of the story. As the content is written in the formal inverted pyramid structure, it begins with a clear summary followed with details of the New Zealand terror attack. There is a featured image at the top uses a recent photo of Trump a week ago due to his statement only claimed on social media. While the news story belongs to the politics category and could be searched by keywords, there is no tag of it. 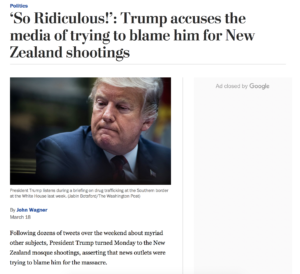 But there is also a credibility problem in the last paragraph of the following screenshot. The author infers ‘few new media have directly blamed Trump’, but there is no further information including embedded or related links, images of how and why did new media blame Trump. Following this paragraph, the author gives an example of an Australian gunman’s statement of supporting the supremacist extremism. But as the author mentions this has caused a discussion, it would be better to show a different statement from citizens instead of just one position. 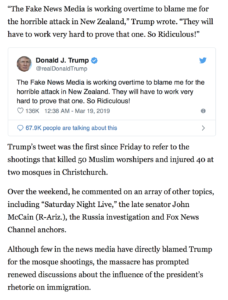 There is another typesetting mistake. In the last paragraph of the screenshot below. The two words ‘aboutimmigration’ lack of a space between each other that may cause inconvenience through reading the story. 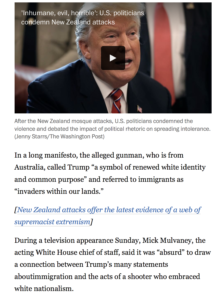 The news story has multimedia includes a featured image of Trump, a screenshot of Trump’s tweet, a Fox News video of Trump condemns New Zealand attacks from the White House and a hypertext link of an indented quote to a news story about supremacist extremism from a Washington Post reporter. Those multimedia sources allow users to embed them and enhance storytelling by expanding the content (Bradshaw, 2013). Using the tweet and video of Trump announcement provide readers with an attitude of him towards the attack.

In the perspective of interactivity, At the bottom of the article is the information of the author and his twitter link below that build a direct relationship between the writer and audiences. The story has 124 comments from users, but there is no response from the author which is hard for both authors and the website to build relationships with users.

The Washington Post has a paywall on its website that enhances the user experiences when reading online. If readers visit the website and view its news stories with the same IP address over an hour, it will block the viewing page and will pop up a payment window. This action forces online readers to pay the digital subscription in order to continually access story content. This movement decreases the user accessibility of the news and could lead to the low interactivity on the website.

At the same time, this page places advertisements on the right side of the whole news story that negatively influence the reading experience. Those user-targeted advertisements are analysed by the algorithm so that could distract users’ attention. It would be better if the sales information is shown in the floating window that users can cancel and read a clean page.

HuffPost, or the Huffington Post, is an American original internet newspaper founded in 2005. It is a news and opinion website and blog with newsrooms in 16 countries owned by digital content company Verizon Media which is a subsidiary of Verizon Communications. The website report globally with both local and international news stories through media methods includes text, video, audio and pictures. The authors of the websites are mostly citizen journalists. In this case, they have standards for accurate reporting and aim to correct errors in their reports and even the sourcing. In 2019, HuffPost becomes the twenty-sixth ranking global news sites (‘The top 500 sites on the web’ 2019), lower than the Washington Post.

According to SimilarWeb (2019), HuffPost got total visits of about 65 million in February 2019. The top traffic county in the world is the United States which takes up over 83 per cent of users in the world, followed by Japan and Canada. The following graphs from Alexa show the users of the news website are mostly female with the education level of college level. Majority of its users browse at work.

This story chooses another angle to write about Trump attitude towards the New Zealand attack. The author chooses IIhan Omar, a Muslim leader,  as the main character of the story and this report angle add the details of the ‘discussion part’ which story one lack of. It has high scannability. This news has a clear structure and clarified summary. It first shows the position and opinion of the Muslim leaders and then the reaction of Trump and the White House, this causes a contrast that could attract readers. While there are several hyperlinks to provide further information about the story and the quantity is larger than the Washington Post, there are some unnecessary links. The links of ‘Kellyanne Conway’ send users to the HuffPost page with all her related news. This distracts readers’ attention from the current story to the others. Otherwise, HuffPost has story sharing links through social media icons on the left side and also keyword tags, which are what the Washington Post lack. 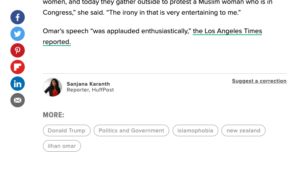 In the aspect of Credibility, it mostly depends on the quality of HuffPost own report quality. Every link to a news report is from HuffPost themselves. This promote method is the same as the Washington Post. In this case, readers will stay at the original website instead of adding traffic to other new media websites.

This story has multimedia to expand the content of news including a report video about IIhan Omar and the White House, 9 hypertext links, and tweet from the president and a news reporter. This enhances the storytelling quality through related links.

HuffPost has high interactivity. The twitter scenes in HuffPost are interactive that allows users to click and switch to the tweet they view in the news. Except for the sharing links, HuffPost has ‘suggest a correction’ for viewers to give opinions of a factual or typographical error in the story. But there is no comment area for readers to post opinions at the bottom, they can only contact the editor through twitter or email. It is less interactive than the Washinton Post.

As for the usability of the story, there are two links cause inconvenience to readers. The hypertextual links ‘some of her fellow lawmakers’ and ‘wrote a column in the Washington Post’ do not open a new tab when reader klick it. It will switch to the other news story website directly and users have to click back to the original page.

In online Journalism, traditional media like the Washington Post has a more concise style of news writing, the editor focuses on the text more than the extra multimedia source. On the contrary, digital-born news media as HuffPost uses citizen journalists who prefer to use more hyperlinks.

Bradshaw, P. (2013). The online journalism handbook: skills to survive and thrive in the digital age. Routledge.

The Top 500 sites on the web. (2019). Retrieved from https://www.alexa.com/topsites/category/Top/News

Journalism Analysis: an insight into CNN’s and BuzzFeed’s online reporting of an American political issue

Introduction Since the late 1990s, the innovation of digital technologies has been changing both the appearance of journalism and the relationship between journalism and its audiences (Bednarek & Caple, 2012). This article chooses two online […]

The pioneers of online journalism came up in the early 1900s (Bradshaw, 2018), among whom VICE and China Daily were standing on the same starting line. The divergence of their development over the past decades […]