April 2 is the internationally recognized World Autism Awareness Day. In recent years, the incidence of autism is rising rapidly.

“The number of autistic patients has increased, ” Doctor  Luo said. “The high incidence rate of autism is related to the understanding of autism. People are getting more and more about it. Therefore, the more people diagnosed, the more the incidence rate will increase.”

Autism is not a mental illness, it’s a developmental disorder caused by nervous system disorders from early childhood.

It’s a developmental disorder caused by nervous system disorders from early childhood. Its symptoms include abnormal social ability, communication ability, and behavior pattern. In the 2018 survey, there were 205,200 Australians with autism, which means that about 205,200 families are bearing a huge economic and psychological burden. According to the survey, the overall prevalence rate of 0.8%, or about 1 in 120 people, 83% of Australians with autism were aged under 25, males were 3.5 times more likely than females to have the condition.

Autism usually occurs before the age of 3 years. Early detection, early diagnosis and early intervention can maximize the potential of patients and make their future life and learning better.

Jiexi, who is a parent of a “star child”. “I have been concerned about autism for nearly 20 years, and also fought for 20 years,” she said. “Ann is my son, he is 22 years old now. Because I didn’t find a proper medical institution and know little about this disease, he missed the best opportunity for treatment.

“He can’t go to school and work as normal people, but his mood is relatively stable, and he can take care of his basic life. However, his language has lost its golden recovery period.

“This is the pain of my life, but I won’t give up Ann.” Jiexi said.

At present, autism is hard to cure, but through timely diagnosis, treatment and the support of education environment, children with autism can learn and grow together with ordinary children, and integrate into society better.

A recent study estimated that the average cost of applied behavior analysis (ABA) treatment for autistic children is $60,000 a year, from the time he or she is diagnosed (usually at the age of 3) to the time when he or she is in school at the age of 6 or 7. The total cost of treatment of four years is over $240,000.

Why is autism treatment so expensive?

“Intensive therapy for autism sometimes means a one-to-one ratio of therapist to child. That means one family has to bear the full cost of a therapist’s employment.

Hollander, director of the Autism and Obsessive Compulsive Spectrum Program at the Albert Einstein College of Medicine, said in an interview: “The issue, really, is to personalize the treatment, people may respond to different treatments.

“You need to assess what are the key target symptoms that cause distress or interfere with functioning and then target the appropriate symptoms, and it differs from individual to individual.”

In the face of high treatment costs, which may increase the burden on many families, the government should also strengthen assistance.

There are two current funding models in Australia now:

Autistic children have limited social and communication skills, also might have abnormal movement. Some strange behaviors of children need to be alerted by parents in daily life.

“Maybe people who are different from others will be vulnerable to bullying. There are many kinds of bullying, even online bullying. The most important thing is how to adjust yourself or seek help from your teachers. ” Ann, Jiexi’s son said

A good attitude of parents is the most important thing. Parents need to accept the facts, overcome the psychological imbalance, and properly handle the relationship between children’s education and training and parents’ life and work. We should take love, patience and perseverance as the driving force, and establish a long-term consultation and cooperation relationship with doctors.

The training should focus on family, make full use of social resources, and carry out training for autistic children through special training or educational institutions. Scientific and effective family intervention is particularly important.

It is the main measure of education and treatment for autistic children at present. It is the premise of helping children to realize self-care and integrate into society as soon as possible. 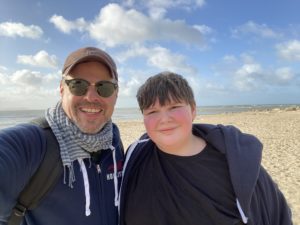 Jasper, suffering from autism, today is his 12th birthday. Picture provided by his father Mike. In such a special period, he feels locked down the easiest thing in the world to deal with.

“I hope other people treat me as a normal person, I don’t want to be treated specially, even if it is kind, which will cause psychological pressure on me.

“I don’t know if you’ve heard such a sentence, ” Ann said. “For the autistic group, it’s the best way to cure them is to get well with them.”