Meat is the first choice in most people’s lives

Death row inmates in the United States put a lot of thought into their final meal choice. After all, it’s the last food they will eat on this Earth. And their choice is telling, for overwhelmingly they want meat. Pork chops, filet mignon, steak, hamburger, meatloaf, fried chicken, sausages…with not a lentil, slice of halloumi or vegetarian lasagne in sight.

Prisoners on death row might not be the most representative of social groups, but their choices give an inkling of the central role meat plays in everyday diets. 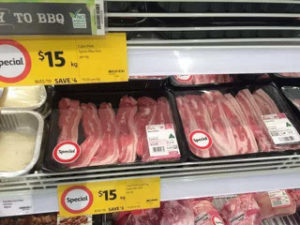 People have the conditions and needs to eat meat

The very earliest fossil evidence of human eating habits bears the unmistakable signs of animal consumption and our dental structure is designed for a diet that will tackle anything, whether animal or vegetable: canines and incisors for cutting and tearing, pre-molars and molars for grinding.

Today, the human diet, especially that of Westerners, revolves around meat. Livestock products provide one third of humanity’s protein intake.

The impact of animal husbandry on the environment

The U.N. Food and Agriculture Organisation found that livestock are responsible for 18% of global greenhouse emissions – more than transport. Feeding and watering livestock accounts for over 8% of global human water use. Of the total combined weight of land-based animals, livestock makes up 20% and livestock displace native species and cause significant erosion problems. 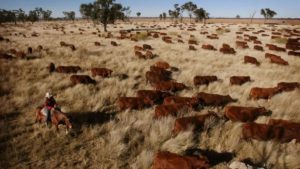 According to a 2005 report from Australian government research agency, the CSIRO, an average Australian eats 35 kg of beef, 21 kg of pork, 36 kg of chicken and 13 kg of lamb each year – roughly 290 g of meat per person, per day. To satisfy the meat requirements of Australians takes 16 million sheep, 8 to 9 million head of cattle, 5.6 million pigs and nearly half a billion chickens.

Meat is popular in Australia thanks to our agriculture industry, which provides relatively cheap product, our pastoral history and our culinary culture, which celebrate traditions like the barbeque and the meat pie.

The red meat industry alone is worth $15 billion annually, meat production is increasing and we’re eating more meat than ever before. While beef consumption might be very slightly down and lamb consumption well down from the 1960s, these days we are eating two to four times more pork and chicken per person. 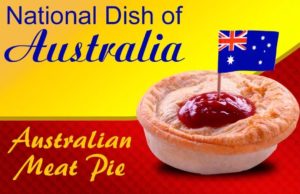 About Yue Zhang 8 Articles
A media enthusiast with a passion for dance and music, struggling to find a way forward.