This is the first article released on BBC world news about the US college admission scandal. It isn’t a news story but a feature because of the word count over 500 and the subtitles used in different parts.

The headline and the lead don’t indicate 5W. The headline is opaque and unappealing. The party of the scandal mentioned in the lead are “the rich and famous”, but the range is too broad. And the video has no definite attribution. In the last part, it mentioned the photos about cheating in India. But these photos are an anonymous information source, and there aren’t any links for these photos.

I will change the title to “A Massive College Admissions Scandal: more than 40 people charged for cheating and bribing, including CEOs and celebrities”. The lead: In a national college admissions scandal exposed on Tuesday, more than 40 people were charged for cheating and bribing, including 33 rich and famous parents, like CEOs of major companies, Full House actress Lori Loughlin and Desperate Housewives actress Felicity Huffman.

The transition between the teachers cheating in primary school and scandal in college admissions is unnatural. I intend to delete this part. Add more details. Introduce more defendants and what they did in this scandal. What is the institutions’ reaction to this scam?

BBC News is currently the world’s largest producer of television news. It is a division of the British Broadcasting Corporation (BBC), with foreign news bureaus in 50 countries. It has 3,500 staff, among whom 2,000 are journalists (Boaden, 2004). The operation of BBC News is influenced profoundly by the BBC’s system. BBC, founded in 1922, is a public institution. It focuses on delivering the content of education, culture and service. The BBC’s revenue mainly comes from television licence fees charged to UK citizens, which are agreed by Parliament (Li, 2010). The second largest part of BBC’s income relies on BBC World Service “which sells BBC programs and services internationally and also distributes the BBC World News” (bbc.co.uk, 2018). So the objective and neutrality of BBC News service are guaranteed in this way.

BBC News audience share features of the high level of wealth, education and a global vision. The “News online services reach significantly more young men than young women” (bbc.co.uk, 2019). BBC platform detected two significant groups, “Wordly Achievers and Culturally Curious”, which make up the major of its global audience. As the most frequent users, Worldly Achievers are “affluent and career-oriented”, and “always first with new technology and extremely brand-conscious”. They like to receive the latest news and “share their insight”. “The Culturally Curious are driven by a desire to develop new skills and a willingness to pay for experiences” and “have a strong interest in arts and culture”. (bbcglobalnews.com, 2018).

BuzzFeed News’s head of audience development, Roxanne Emadi, said that “BuzzFeed News’s audience is 69 per cent female and 43 per cent millennial” (Schmidt, 2018). The female audience usually take more family responsibilities and prefer information about education, fashion, gossip, etc. to hard news. The “millennial” label is used to a generation born between 1981 and 1997, who are the first generation to become adults in the new millennium. Millennials grew up in the internet environment. “They are well-educated and tech-savvy” (Frey, 2018, p.2).

Both BBC News and BuzzFeed News have tracked the US college admissions scam with several reports including detailed features. Due to the rules of only analysing news stories rather than features, I selected these two articles, “Olivia Jade Giannulli and sister in spotlight amid college bribery probe” (Report 1) and “Here’s A Bunch of Memes about the Felicity Huffman and Lori Loughlin Arrests”. (Report 2)

In the two selected news stories, there are many same ways in which the sites present their basic facts.

I. First, they both started with the basic fact that the FBI unveiled a massive fraud scandal involving dozens of wealthy and powerful people, including CEOs, university coaches and two famous actresses, Felicity Huffman and Lori Loughlin. They were accused of fraud and bribery. In Report 1, this case’s primary source is “the charging document”. “The FBI” and “the indictment” are both the authoritative sources of BuzzFeed News’ Report 2. So the news facts and the content of the two articles are both highly credible.

II. They both added some extension content to the stories. In the extension part, information on social media became the focus. BBC News used the post on Olivia Jade’s Instagram. BuzzFeed News used some twits from ordinary users, which include many funny memes about these two actresses.

III. They both embedded related story links, to constitute a complete narrative coverage together with the previous stories. 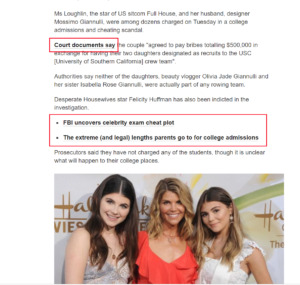 IV. Their reports used various media forms such as text, pictures and videos to achieve the best communication effect. 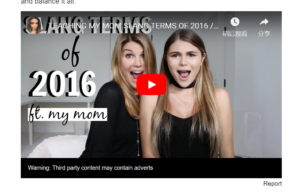 V. They both set up buttons allowing users to share articles on various social media, to get more views and traffic.

The reason why there are so many similarities in these two stories is that they both follow the basic rules of the journalism operation. They need to organise content basing on facts, show the audience a complete picture of news events, and also provide proper news interpretation. To survive in the competitive Internet environment, they must use various technical means to achieve better news presentation effect.

BBC News and BuzzFeed News have different systems, orientation and audience. These elements determine their different ways of presenting news. Generally speaking, the reports of BBC News are neutral, objective and restrained. BuzzFeed News has a younger and livelier news presentation, and their staff have a better sense of playing the Internet. Seen from the two selected stories, they differ in the following aspects:

I. Different focuses and writing styles. Report 1 is still mainly exploring the situation behind the basic news facts, with a little extensibility. It extends the content from the relevant actor to the conditions of her daughter. BuzzFeed News’s Report 2, however, is entirely a piece of popular online news, exploring the online trend, integrating the information from netizens, and presenting the story in a relaxed and funny way. I think the reporter of this story noticed the topic #FreeAuntBecky on the social network at first and then found many interesting memes produced by users and created this article. The style of the first two paragraphs is very humorous like the author is talking with you.

II．Different attitudes towards UGC (user-generated content). After the arrival of the Web 2.0 time, “audiences, empowered by these new technologies”, can use cheaper and easier-to-use tools to participate in content interaction and even production (Jenkins, 2006, p.24). Of all the audiences, about 10% are active producers. They produce content independently and spread it on the Internet, while the majority of the viewers are passive spectators and information recipients (van Dijck, 2009, p.44).

BBC News tends to use information and materials collected by their staff rather than UGC to ensure the seriousness and authority of their reports. BuzzFeed recognises UGC as a significant source of inspiration and material. Memes in this article are the content produced by active users. By capturing these active users, they can activate the news interaction of their entire website. 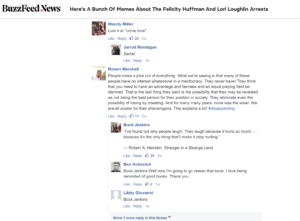 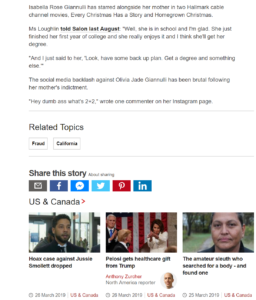 III．Different attention to the interactivity with the audience and correspondingly make the different design of interface and functions.

Jennifer Stromer-Galley (2004, pp.391-394) provides a way to interpret the interactivity in two-way: as a product, “Interactivity is defined as the control users have over what they see through some computer experience”. As a process, Interactivity is “person-to-person or human interaction”. The modern technology brings the audience more interaction opportunities, triggering “increased demand for interactivity”. This means that the journalism professionals must create some “usability design that takes into account demand for user engagement”. 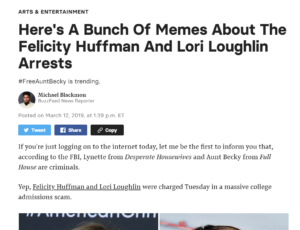 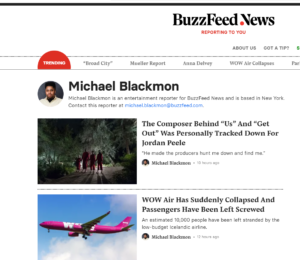 BuzzFeed News shows a comment feature at the bottom of this article and receives more than 30 comments. Moreover, under the title of the story, there is the reporter’s name and profile image, and links on them. Users can click them and go to the next page, which shows all the articles of this reporter and his email address for easy contact. Under Report 1 of BBC News, there is no comment area and specific comment function. Below the title of the article, there is no author’s name either.

When analysing the practice of participatory journalism, Karlsson and other scholars found that the situation of audience participation is unsatisfactory. Some traditional news organisations still adhere to journalism professionalism. They do not want the audience to participate too much in their news production process, and sometimes they may set limits in comments and other functions. (Karlsson, Bergstrm, Clerwall & Fast, 2015, P. 305). The fact that BBC News does not have the comment function on the article interface seems to confirm scholars’ observation.

IV．Different ads arrangement. As the page settings, the BBC News page is more concise and refreshing, with only three advertisements on one page. BuzzFeed News has more advertisements than BBC News does. There are more than ten advertisements on the page of Report 2. Some ads are inserted in the article, disrupting users’ viewing. The reason for the situation mentioned above is that the two sites have different revenue sources. BBC News is mainly funded by its parent company, and its income comes mostly from the TV licence fees paid by British citizens and the TV programs sold abroad. Only in recent years, due to the competition of the internet media, the life of BBC News is not easy, so a small number of advertisements have emerged on its site. BuzzFeed itself is a commercial digital company, and advertising revenue on the website is their primary business income. 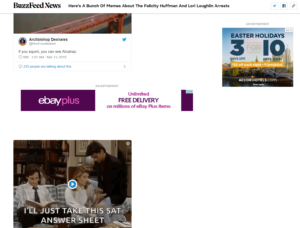 Between Report 1 and Report 2, I think the later one is more interactive and shows more diversity. BuzzFeed News has produced some excellent traditional news and hard news reports before. More users are willing to participate in the interaction, and the news production process, which means that the website has more possibilities in the future. When young generations who are accustomed to the new way of reporting become the mainstream of society gradually, the market of news websites will be reshuffled.

Lafrance A. (2012) BuzzFeed with a press pass: What happens when the GIF kings try to take Washington? Nieman Journalism Lab, 21 August. Available at: http://www.niemanlab.org/2012/08/buzzfeed-with-a-press-pass-what-happens-when-the-gif-kings-try-to-take-washington/ (accessed 19 September 2014).

Wang Shan. (2018) “The investigations and reporting of BuzzFeed News — *not* BuzzFeed — are now at their own BuzzFeedNews.com”. NiemanLab. Available at: http://www.niemanlab.org/2018/07/the-investigations-and-reporting-of-buzzfeed-news-not-buzzfeed-are-now-at-their-own-buzzfeednews-com/ (accessed 18 July 2018).

About Yanan Yin 4 Articles
Current postgraduate student of the University of Sydney, doing the Master of Strategic Public Relations.

Digital-born news organizations — organizations which originated from the Internet (Martin, 2019) — tend to do better multimedia online journalism coverage than legacy papers. However, that is not always the case. Sometimes, legacy papers do […]